The Jacksonville Jaguars will be in control of their franchise destiny beginning with this upcoming NFL Draft. The potential talent of the draft makes this an exciting event for all Jaguars fans. Perhaps this is the beginning of a new era in Jacksonville football history, or will they mess
it up?

Trevor Lawrence is the most sought after quarterback in this draft pool. However, Zach Wilson is getting rave reviews from media pundits and scouting aficionados. Would Jacksonville be alright with either quarterback under center?

The football analytical site, Pro Football Focus (pff.com) offers a mock draft simulator and grades the draft after it’s complete. This was an invitation too tempting to pass up due to my curiosity. Suppose Lawrence went first in one draft and Wilson went first in a different mock draft, what grade could be earned for such silliness? 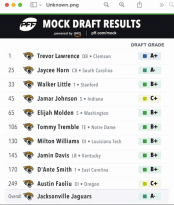 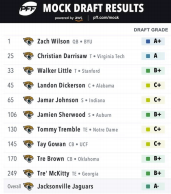 Most of all, talent evaluation is the key to building a great roster. The previous leadership hit and missed in some important areas. Offensive line play wins and loses games. It does not matter who is calling signals if the defensive hurries him continually.

Stay tuned to see how things play out. Be sure to catch the current JJC podcast where Andre Moultry accurately discusses the Jaguars situation in each podcast episode.